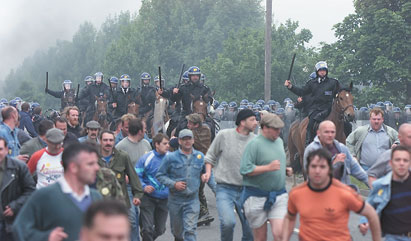 The Battle of Orgreave and Mark Fishers presentation about Capitalist Realism. Not sure that it matters what order I saw them in, but I saw them both within 24 hrs of each other and the effect is very visceral. The political mechanisms in place, the role the media plays in presenting events to us, the local and global posturing of power. If the events at Orgreave are when everything changed, when British politics formally adopted the monetary model rather than the social model of capitalism, then it was only a partial success. It wasn’t about dismantling the miners specifically, as much as dismantling the workers’ security and comfort. The constant state of anxiety Fisher now attributes to the workers of today is only possible because there are still workers, there is still a large group of the population who are indeed workers. They have survived.
Both Fisher and Deller seem to me to propose optimism and faith in what may come next, which I really appreciate, as our current economical and political climate is often presented negatively to us by commentators.
This open ended view is something that I really try to build into my work too, and it’s what keeps me interested, keeps me going. Stating something provokes a much different conversation from questioning or proposing something. (see later post re: Joya residency)