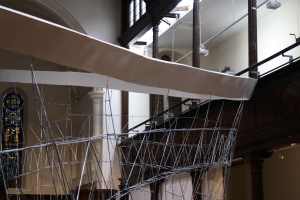 Walking into the cool darkened interior of Fabrica, Brighton in the unusual heat of July invoked a feeling of awe and relief which I imagine was not dissimilar to the response of the devoted when they attended the building to worship God in days gone by of churchness of this decomissioned church building. You could say that the divine was present at the ‘A Fine Line’ exhibition by Frederic Geurts: Arching and reaching in the heights of the space was a line of sorts- a solid slender rectilinear shape of a line, blank white against the wood and shadows of the building. This construction was ‘supported’ by a series of pylons – though these were at times struggling to stay rooted to the floor, lending an air of movement to the whole piece (though I felt quite safe). This large simplistic feat of engineering was accompanied in the space by balancing puzzles, which I felt were an unneccessary development on the intention of the work. The ‘Fine Line’ was much stronger viewed on it’s own, and whilst the details of construction were in places a trifle un-holy, the upwards gaze required to appreciate it, and the stillness of the space made me feel blessed. 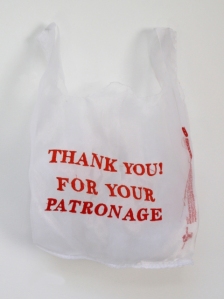 In San Fransisco at the end of July I visited the Jack Fischer Gallery and saw the exquisite works of Lauren DiCioccio. Her meticulously hand sewn works transformed everyday objects into fine fabrics and threads, somehow capturing the qualities of the objects so clearly that many required a second look to believe. Life-sized, featuring subjects such as slides, water bottles, lightbulbs and playing cards, the works command consideration for the tactile and the looming obsoletion in the everyday for these objects. I was really impressed with the workmanship, and also with how the works were presented in the gallery: the bulbs for example were all piled in a crate in the corner, as if on their way to or from use.

In Berlin in August, I saw Dream Passage- Bruce Nauman’s retrospective presented by the Hamburger Bahnhof. Getting back into large public spaces full of art was a real breath of fresh air from lots and lots of galleries I’d seen in SF. Interesting to notice the contrast in how I felt in each space. Here with the works of Bruce Nauman there was the space to really do it justice and revel in the diversity of the work assembled. Many large scale rooms and spaces accompanied some neon pieces I was more familiar with. I am still trying to process all that I came face to face with here: the range of media, the range of ideas, the consistency in the execution, the fearless drive you could feel the artist experiencing in addressing them all….. Spent quite a while in a piece called Eliptical space, which isn’t usually the sort of experience I go for in exhibitions, I find them really overpowering, but something appealed with this one. I spent a while peering in each end, listening to the person inside at the time- the gap at each end was large enough to glimpse them through but too small to pass through, and it was painted a strangely unoffensive pistachio colour. When I got my turn with the key, I locked myself in and I have to say it was really moving- too high inside to climb, wide enough to turn round in, though narrowing quickly into curves- you couldn’t quite see out but the light could get in… I was won over, and spent the rest of the afternoon in a pink room, a room with mirrors, rooms too narrow to walk down, rooms with security cameras in and then sat on the benches arranged a bit too close opposite each other to leave space for any event to take place there… I came away with the impression of such energy for exploring, it was almost bewildering how much work was there. It inspires me to see that the variety of materials is immaterial, the consistency of the ideas is what keeps it together. Nauman seems always to be laying the ironic out for us, asking why we think it’s normal, seeing what could slip past us if we stop paying attention- reminds me to keep my eyes open.