Yes, long before Victoria Beckham sashayed her way into our consciousness as Posh Spice, I had a tyrannical headmaster who terrified and taught us stuff in almost equal measures.

One of the lessons which stuck with me (along with speed-reciting of the 9 times table for fear of being combusted by the Times Table Dragon) was his understanding of the origins of the word posh; Port out, starboard home, which was how the better-off colonialists sailed out to India and the Empire, back when that seemed like a good idea. That way you travelled on the shady side of the ship, out of the blazing afternoon sun – the port side (left if you’re on the ship) heading south, and the starboard side (right hand side on the ship) when you head back north.

I have been thinking about global trade of goods as I made the work for Nothing Endures But Change, which is part of the Waterloo Festival. The colours I have used and the orientation of the work reflect that mythical description of the word: I think a lot about the trade in power and privilege which dictates where all the stuff we buy is manufactured by lower-wage workers. This ongoing exploitation/natural flow of capitalism and industrialisation (depending on your politics I suppose) (and how guilty I wake up feeling that day) seemed to be relevant in the context of class and status, and the questionable title of posh which some are labelled with.

Then when I looked into the name further, it seems the origin is more interesting, stemming from the street term for money which was used by criminal gangs in the 19th century. This feels a bit like reclaiming the word, it being used as slang for wealth, rather than as a sort of put-down. The fact that the myth about the ships headed for Asia has proliferated almost reinforces the system of class and entitlement which the underworld operated (operates) apart from. So that’s a fortuitous reference to start with.

Then, in the making, to cheer myself up (and ease the guilt I felt as I considered what had been shipped where on the pallets I’ve used) I made all the wires point up. Is it possible to have cheerful, optimistic wires?? 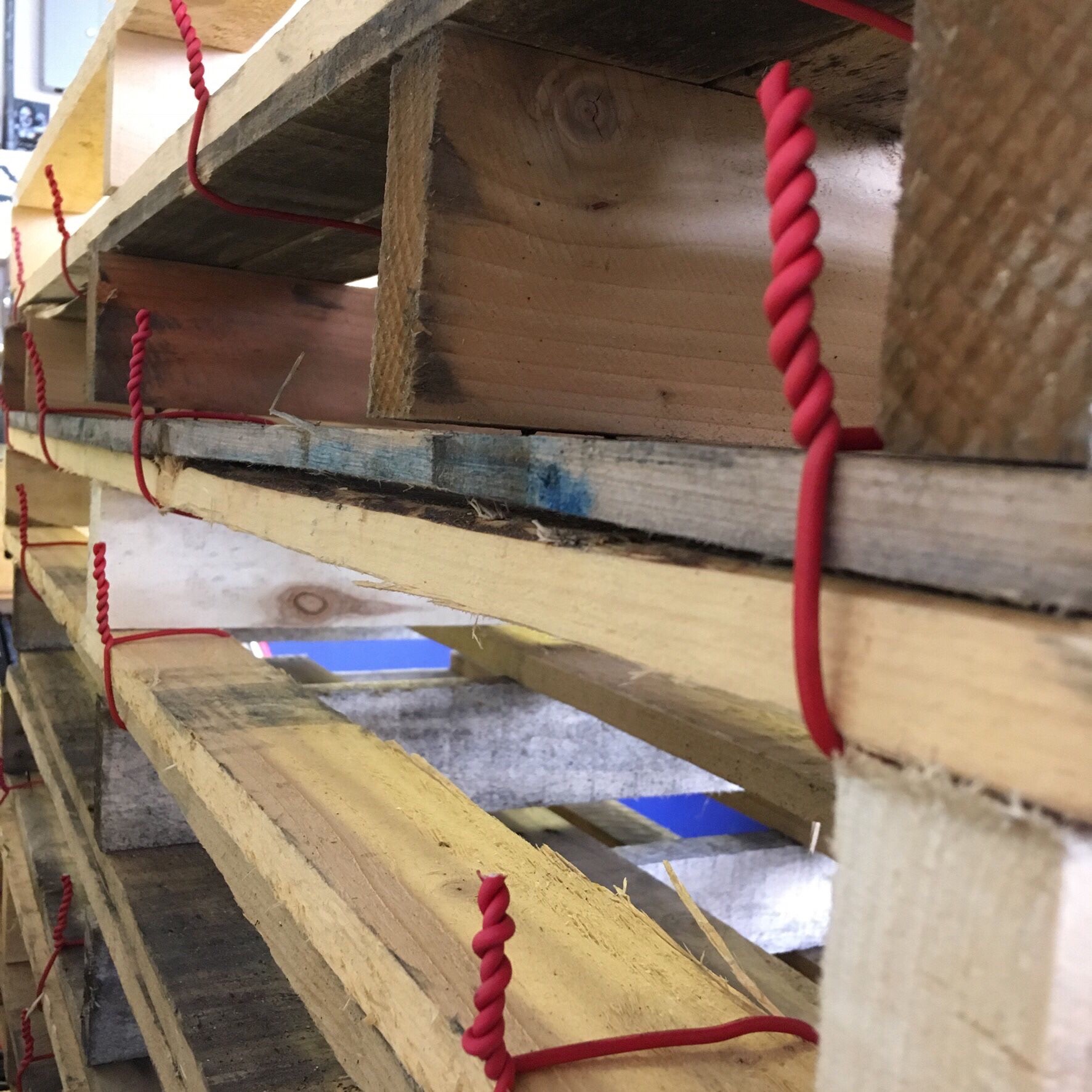 I hope you can join me on the 6th for a walk round the sculpture garden, I’ll see you there at St John’s Churchyard, 73 Waterloo Road, SE1 8TY from 6 pm.

Andrew Simms: To change the paradigm, shift or bust, as artists is our ‘responsibility to make art which provides an irresistible temptation to see the world other than how it is’

A Chelsea symposium presented by the ever-inspiring David Cross, with a line up of speakers prompted by Barbera Steveni

Dr Hayley Newman who introduced us to her 2006 project MKVH which took place in Milton Keynes. It involved a bus driving around the grid-based road system of the new city, on one full tank of fuel, until the fuel ran out. This work references the grid system and it’s origins in western art, first written about by S Krauss at the turn of the century. The artist was also referring to peak oil production and the consumption of fossil fuels. The film of the work was transcribed entirely, into a screenplay.

Michael Fehr from Berlin University of the Arts. He presented the proposition of an architect, made in the 70’s, for a futuristic survival structure for humans. Need to look into details, as I have it down as Gunter Ekhart’s Tube Continuum project, but can find no record in google-land. Comprised a structure to circle the earth containing living essentials for 4 Billion people, including housing, transport and manufacture and farming. I’m quite partial to extreme solutionist fantasies, and could see myself sealed in a little apartment, looking out at the scorched earth trying to regenerate itself…. sort of.

Marina Landia, also of Berlin University of the Arts talked about her audiovisual work addressing the global financial sector.

‘Every society clings to a myth by which it lives: Ours is the myth of economic growth’ T Jackson

Another illustration/explanation underlying the problem by which banks have become too big to fail, and now operate outside capitalism, being bailed out by taxpayers.

David Cross talked about Cornford and Cross’s work The Lost Horizon. This referenced visual culture and sustainability, with an applied semiotic analysis. Our ecological debt.
I seem to reference the work of Cornford and Cross so often, I won’t say much more now, suffice to say that the more I look at their work the more I realise how bang-on they are. Love it.

The highlight for me came during the presentation by economist Andrew Simms, who encouraged us not to be intimidated by economics, or the suits who expound on the fable of capitalism and economic growth. (Growth meant to lead to maturity, which is where growth stops and is maintained at a healthy constant. See the impossible hamster for warning..)
Ironically, the shirt and suit trousers he wore did give more gravitas to what he was saying, so I failed that test, but he talked about the following:

We have 50 months left before we go past the point where a 2 degree rise in global temperature becomes more, rather than less likely.

‘It is astonishing that capitalism works on the theory that the wickedest men do the wickedest things for the greater good’ JM Keynes.

‘We will not sacrifice the economy for the environment’ George Osborne. Heaven help us.

Mr Plimsol revolutionised shipping at a time when it was fundamental to our economy and empire with the Plimsol line, which made shipping safer for all. How about a petrochemical or ecological plimsol line?

To change the paradigm, shift or bust, as artists is our ‘responsibility to make art which provides an irresistible temptation to see the world other than how it is’

Herbert Davy proposed the subtle and complex economics of sharing. Better not bigger.

*Do not burn yourselves out*

All that is solid melts into air.