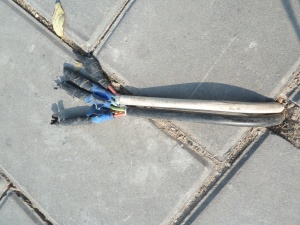 Cables featured heavily in my experience in Beijing. Disconnected, surplus, ignored, given a place but not a use, there’s no doubt I was anthropomorphising rather. There is also little doubt they will feature in my work in the coming months. Already new connections have been created in my studio, new ways of presenting. 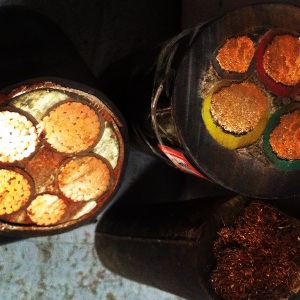 The wind monitors I could see on the tangled electric pole outside my hotel window were a (dusty) splash of colour against the foliage, and their shape echoed the insulation domes holding the wires. Finding them at the immense building supply market was a real treat, a part of the mechanics of the place that I can own. Alongside this is the large, smelly collection of cables I have been collecting on my wanderings. These, along with the smaller fragments which feature in my journal, are precious: despite the dust and grime of the huge city, Beijing is pretty spotless; everything has a scrap value, if you collect enough of it. The well-documented sight of a diminutive figure struggling under the weight of a gargantuan bag of paper or plastic is familiar even in central Beijing. The recycling and scrap yard of Fenjaicun on the outskirts of (but still technically central) Beijing.
Copper wires we’re obviously rarely overlooked, and often all I found were the plastic casings, the metal already on its way to it’s next incarnation. But everyday I did find something, not always copper, but metallic. And some days I struck lucky, and the smelly bag of filthy cables took it’s rightful place next to the wind monitors and junction box in my suitcase home.
The process involved in checking the case in is worthy of another blog all of its own….