Unusally I have spent a good chunk of time getting the macro shots of my wires right to produce to photographic work. This follows on from the Boxpark show we produced, where our images were blown up to posterboard size. I liked the confrontational experience, and that people struggled to see what they were looking at at first.

These images are A1 size, so not as big as the posterboards. They are aluminium mounted which maintains my metallic theme, and are really striking. The clarity and composition hopefully overcomes the problems with earlier versions.

Previously it was noted that they were more like portraits which wanted the viewer to see the real thing. Hopefully here I have given them status to be seen in their own right. 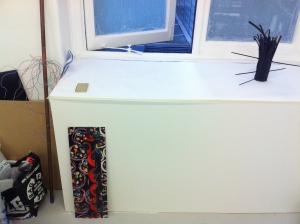 I even liked the test prints, so mounted them on offcut strips of aluminium.

Despite having these 2 choices of size, it seems unlikely that they will make it into the show at this point, but I still like them enough to show them again in the future.