Have submitted this for inclusion in the Chelsea MA show catalogue, and need to re-read to stay focused on what it is we are trying to do here:

‘My work is concerned with the physicality of exchanges between people, objects and material.
In particular I investigate the hidden infrastructure of the interaction between these things.

So, with the experience of working once more in the college studios,I’m finding my workings exposed. I have got quite used to making all my mistakes in the safety of my own studio which I share with friends. Only the work which survives the initial culls makes it out to the light of day, and even that is not guarantee of its survival. So here, trying things out, colleagues, tutors and god know who else who walks round here (and there always seem to be people) can see my experiments.

Also have moved out of my normal work space for the first time since the project in the Morgue. That resulted in lots of constrained forms which the body could relate to. Moving into a larger more open space has expanded my way of looking at the work, which has been freeing and confusing. As things have spread out, I am reminded of the criteria on which the show is assessed: editing. Our ability to spot what we are working on which is working, and putting the rest to one side.
The incarnations so far have by degrees followed the layout of the electric wires and living visible above the space, which has actually seemed to flatten the work out. Nothing was moving. Today the prospect of moving spaces has opened things up a bit which is actually really interesting. I have started playing with materials and clumps again. 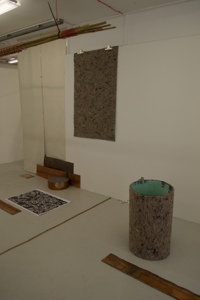 taking the works from the morgue show and just transplanting the into this space changed them somehow, and seemed to short circuit the conversation between the wires. Adding the found bamboos might be a material too far, although the alignment between them and the wires is interesting. 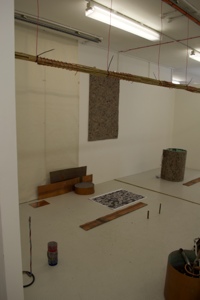 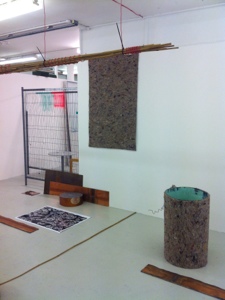 Allowing the arrangement of the objects, or works, to be dictated by the electrics mounted on the ceiling above, things quickly got locked in.

So. Take it all out and start again.
To be trying to make new work at this stage, so close to the show seems madness, but something happens when you move into a new space. Surrounded by other new works from other artists, you can’t help but feed off all that is going on. In one way having so long to ‘build’ the show is really hard, in the same way that too much choice in life hard. Thinking about it differently, seeing it as just my studio, where I happen to be working for now, some things seem to emerge from that.