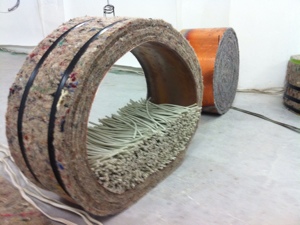 Three days in a project space which used to be a Morgue in this buildings history. Cool quiet and calm. I booked it with the intention of trying out some multiples on a larger scale than I can do in my own studio but after the last tutorial I had with Sadie Murdoch, I went off the multiples plan. Instead I gathered a lot of scrap metal and rolls of the cheapest felt underlay and piled in with them.
As they started to take their places in the space, the cut down water tanks, the wires and the textured coloured felt began to look less chaotic, and started talking to each other.
Since I have stopped telling my work what it should be saying and started listening to what it seems to say on its own, I have let go a lot of control. This is a great weight off my shoulders, but also really anxiety ridden. There is no way I would have trusted the space or my colleagues with work like this when I began this course, it’s really quite intimate inviting people you hardly know into your working space. It’s work it for hearing from them what the work is managing to say to them. Tutuorial notes on space to follow.

One thought on “Big things / no things”