‘Henry Moore changed the way we understand sculpture. His Foundation continues to do so today’
Institute has outstanding library.
They also put on shows which engage with sculpture today:
Helen Chadwick. Will inherit legacy of Moore.

The Shape of time, 1913, year of Duchamp, ramifications for design, writing, etc.
Check out current Barbican Duchamp show.
The Shape Of Time includes objects which reference and recreate other artworks. Including Sturtevent’s duchamps wheel.

Le Feuvre tests out ideas on other people, sees this as a role of a curator. Filliou asked when does an action or object become a sculpture. HMI will run 40 days of tests of his artworks.
He said ‘art is what makes life more interesting than art.’ ‘ A permanent endless process deply embedded in daily life’
This is his first solo institutional presentation in UK. He has history of involvement with Leeds. He made The Game with yoko Ono, Brecht, Robert Page, etc. This Game involved blindfolds, cards and mutual trust in all players, acting as allegory for how we engage with artworks. This was later expanded. Looking at what is art.

This relates to the crisis we are in today where we do not look at art enough today. Reproductions do not count. Art-light reading of works where we don’t actually engage.
Research is key to Fillous work, and Le Feuvre, and informed them and must inform now too.

Roulette poem. Festival of Misfits . Presented at ICA. Happening. Recreating it this year at the HMI.
RF Often associated with Fluxus, but he rejected being defined. He kept ‘his own council and independence’ :Art needs to be constantly shifting to the limits of its own horizons.

RF was in French resistance. Traveled to USA studied politics and economics, traveled to s Korea where he discovered bhuddism, then around Europe. Broad philosophical theories on society. ?
When asked whether he could contribute to the current proposed show Robert Page responded ‘doubt that I can add much at present to a better future for the past’

RF was interested in Fourrier’s writing which deconstructed social structure. He made a series of galleries in his hats. Multiples, miniatures, conformed to rules o a gallery in gathering and presentations but it was a mobile museum. 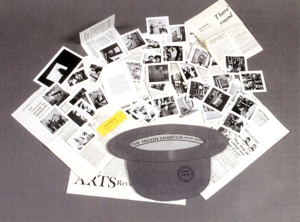 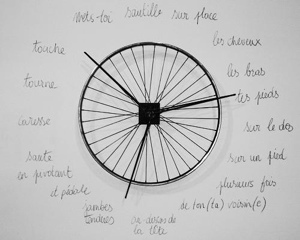 RF made works which could be extended, including cup hooks ans stamps, so he could post them as editions (Fourriere had made his manifesto available by subscription too)
This made the artworks available to the public, engaging them with it, a la duchamp who declared that the audience completes the artwork.

‘Well made, badly made, not made’. Equalitarian value of artworks.

Baldassari said ‘art comes out of failure, you have to try things out. No use saying I won’t do anything unless I do a masterpeice’

RF made work of dusters with dust from old masters in the louvre ‘gathering dust’. Even masterpiece gather dust, could the dusters not just as easily be masterpieces?

Towards end of life he made telepathic music, telepathic sculpture. Gathering people round the art, referencing Duchamp saying that he wanted to ‘place painting at the service of the mind’.

Art. Work. Work is about pleasure, engagement, and rethinking the way we might enjoy our part in the world.