At first it was terrifying and very odd to be showing work to our peers (and tutors) which we had never tried before, but as the evening kicked off it was actually exhilarating. It was more fun than I’ve had a lot of the other shows I’ve been involved in.
Firstly, looking around at the work it was clear to see who had made what, based on what you knew about their main practice. It was fascinating to see it filtered through into something else.
Secondly, it was really liberating, not being so attached to the work, not allowing yourself to take it too seriously – if it was slated, you could easily say to yourself that it didn’t count as it wasn’t really your work. What I never expected was the positive reception, the not-slating.
So as the evening wore on, I finally began to get it. The whole point of the exercise. The rocket up the arse.
It was extremely liberating to try something new. Having been encouraged at the beginning of the course to focus, I realised that this could just as easily mean to focus the ideas as the medium. The practice itself can be varied. This seems so blindingly obvious now I’m almost embarrassed to not have thought of it before.
Another thing which occurred to me was the role I play in the institution of an art school. At the very beginning Brian Chalkley reminded us that we are actually artists, not students. This suddenly flattened the pitch, effectively making us all peers. So why remain so beholden to tutors as figures to seek approval from, rather than relating to them and their critique as with all the other people in the same room.
My terrifying painting was likened to an early Ben Nicholson. My copper work so far was described as worthy. Those descriptions feel like huge compliments and damning condemnation at the same time. I’m quite proud of myself as I watch myself rise to the challenge they lay down. 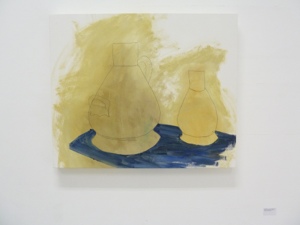