They spoke about the evolution of their work, and where they have coincided. David Nash is as generous as ever with his energy and tales, and it was more of a retrospective evening than engagement in new critical contexts. This was in keeping with the constancy of the natural evolution of how Nash has always worked, how his works work, and how the world works, in particular, nature.

I had a good wander round Kew Gardens for a couple of hours before the talk, and took in some of the work in situ. Most of it I had seen at last years Yorkshire Sculpture Park show, but it was great to see them in different contexts. In particular the Oculus Block, a gargantuan form made of four fused eucalyptus trunks, and the Charred Sphere.

The Oculus Block was inside at YSP, where it towered over you and filled a huge space with it’s presence. Somehow here, outside, it seemed even bigger. The textures of the surface are even more pronounced. The views through the spaces are all different.

The Charred Spere is on a hill, sited close to the Kew Time Capsule. This struck me as a commentary on the future of the planet if we don’t alter our behaviour. Nash diplomatically sidestepped my direct question about this later… 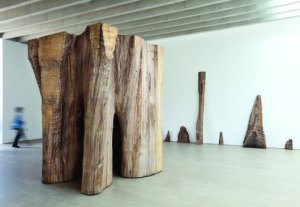